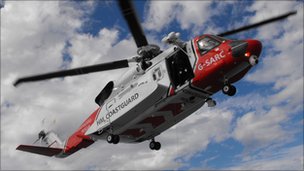 The coastguard helicopter was scrambled in hurricane-force winds

Four thousand homes are reported to be without power in Shetland, after hurricane-force winds blasted the islands on Christmas Day.

Gusts of up to 100mph were recorded. A helicopter dealing with a medical emergency was said to have been blown backwards by the wind.

Scottish and Southern Energy said it had drafted in additional engineers to help restore power.

The coastguard rescue helicopter was scrambled at about 15:00 on Christmas Day to assist with a woman on the island of Yell who was critically ill.

The woman was taken to Sumburgh and then on to hospital in Lerwick.

Wind conditions were so severe that the aircraft was flying backwards in some of the gusts of wind.

A coastguard spokesman said the weather was "beyond hurricane conditions" at times.