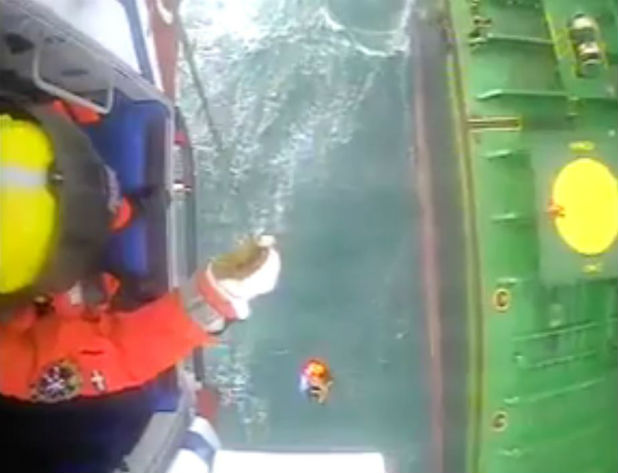 The winchman dangles below the rescue helicopter as it pulls away from the tanker. Picture: Maritime and Coastguard Agency

The rescue took place on March 5.

The coastguard were alerted that a crewman onboard a 195-metre tanker had injured his hand while the ship was 29 nautical miles south-south-east of Falmouth.

A rescue helicopter from Newquay was sent out and captured this footage as the ship battled its way through large waves, which were breaking across the vessel's bow.

A coastguard spokesman said: "A tanker vessel contacted the UK Coastguard asking for medical assistance for a crewman who had seriously injured his hand. At 1.35pm, our search and rescue helicopter based at Newquay flew through strong 50-knot winds to reach the vessel in big swells, sea state 6."

The tanker turned head-on to the wind as the helicopter came alongside. Picture: Maritime and Coastguard Agency.

She added: "The helicopter captain asked the master of the vessel to turn into the sea to minimise the movement of the vessel so the helicopter winchman could be lowered safely. The casualty was winched on board and taken to Derriford Hospital (in Plymouth). We all wish him a speedy recovery."